To access current UK civil aviation regulations, including AMC and GM, CAA regulatory documents, please use this link to UK Regulation. Please note, if you use information and guidance under the Headings below, the references to EU regulations or EU websites in our guidance will not be an accurate information or description of your obligations under UK law. These pages are undergoing reviews and updates.

The bowtie depicts scenarios in a time ordered sequence moving from left to right. 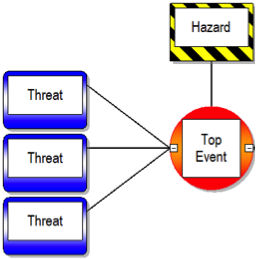 They describe events that may cause an unsafe state if not managed with preventative controls.

In our example of driving a car on a busy UK motorway, a threat would be tyre blow out.

A possible direct cause that will potentially release a hazard by producing a top event.

Provide feedback for this page

Please enter your comments below, or use our usual service contacts if a specific matter requires an answer.

Fields marked with an asterisk (*) are required.